E49d – The main methods of management and governance

Observing, after first restating the context, the current situation and the issue of shanty towns around the world (please refer to Factsheet E49 a) and the technical means available for bringing drinking water to them and distributing it there (please refer to Factsheets E49 b and E49 c), which are the various and best means for managing networks, means of carrying water to homes and installations, that are most often performed by small local operators or resident’s associations.

2) What does governance mean ?

This term is generally used to refer to all of the organisation rules covering a company or a service at a more or less large scale. Consequently, governance is often referred to for drinking water and sanitation services, and especially for the way they are managed, whether publically, privately or by a community as is often the case in shanty towns.
To find out more about the various governance modes, please refer to Factsheet C5 “The various legal modes of governance and management of water and sanitation services in developing countries. Community management”.

We will see the various kinds of governance that may be found in such areas or neighbourhoods, with the specificity of shanty towns being that these are poor and very harsh neighbourhoods, often illegal ones, where the municipal authorities and public services have little presence and ignore or fear the residents, sometimes even being scared to enter these areas.
We are therefore often in the presence of many small operators, most often private ones that do indeed provide services that are appreciated by the population but often at high cost, and except for the largest ones, seldom approved and often merely tolerated by towns and cities. They are lightly organised, poorly coordinated and have little oversight.

The multiplication of these operators should therefore be compensated by improved coordination and monitoring of their services and by instigating a true dialogue with the municipal authorities, if only to avoid the excesses sometimes observed and to ensure that more effort is made to evolve the current transitory situation towards a better quality, lower cost, public service.

This is a very important point for it often conditions the success or the failure of a programme to supply a shanty town with water. 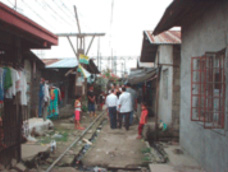 There are various kinds of governance, but experience tends to show that, for lack of a better approach, and especially given the very small number of towns or cities that are willing to expand their public water supply networks into these least affluent and precarious communities, despite this being the preferred solution sooner or later, the best solution at least temporarily is to entrust a management role to small public or private operators overseen by the town or city, or to community groups of neighbourhood residents with whom agreements are made.

This really should be the rule. For that matter, it in no way stops the relevant towns and cities from contracting out all or part of the water distribution service to neighbourhood committees or to small private distributors if they are, at least for now, the ones closest to the populations and the most effective in their field.

Entire network management by a single operator (the same one as the main network)
This formula is a fairly frequent one in developed countries, where the authorities retain ownership of the installations and exercise control over the provision of service, but entrust management to the private operator of their choice after a contract is negotiated and signed. In recent years, this approach has suffered a number of failures, especially in Argentina, Bolivia and in the Philippines. It has become rarer.

Partial network management by one or more private operators
In this case, the town or city lets one or more local private operators handle the distribution, and in some cases also the production of water (e.g. by creating mini-networks from private drillings) in certain areas (e.g. with water purchased in bulk from the city and resold by private water kiosks or standpipes). 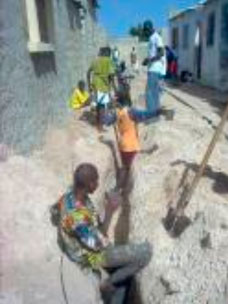 This comprises letting community groups of residents from the same area or neighbourhood manage the installations themselves (most often after first taking the initiative of building and paying for them, for lack of any initiative on the part of the authorities).

Depending on historical factors or the local situation, these communities will then manage all or a part of the technical installations, that are generally fairly simple, and that serve to pipe the water in, as well as the distribution services and the collection of fees that they set themselves. (Fees are sometimes, but seldom, regulated by cities and towns).

These organisations are generally setup as neighbourhood committees, user group networks or management committees under various names and with a more or less well structured approach and they need to be, although this is not always the case, competent, unbiased and representative of the population. 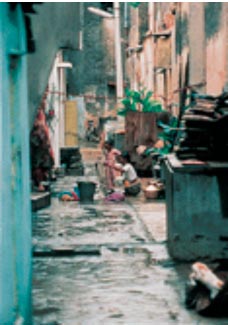 Generally setup at the behest of NGOs or funding providers who already have a solid track record in rural areas, these committees are generally made up of unpaid and dedicated persons led by local leaders, but also sometimes, unfortunately, by less diligent individuals influenced or controlled by persons or donors who are far from unbiased or personalities or political parties seeking to anchor themselves in these neighbourhoods.

Their characteristics and the way they operate are fairly similar to those describe more generally in the corresponding Factsheets C5 to C7 to which therefore we suggest you refer.

Here, we prefer to keep to an example set out below of how such an organisation can work and what results can be achieved. The example comes from India, from one of the shanty towns in Mumbai (formerly Bombay).

In some cases, we observe either throughout a shanty town or just in some parts, a juxtaposition of some of the governance modes described previously.
This situation is not an uninteresting one, for it may become the starting point for progressively orienting installation governance towards a public management system, with or without any contracting out, an approach that should rather become the norm so that shanty town inhabitants are treated as well as those in city centres who benefit from better quality networks at lower cost.

This example, provided by Rémi de Bercegol, a dynamic member of “Réseau Projection” a network of young water professionals is simply summarised here. A more detailed description of it can be found in his LATTS thesis referred to at the end of the Factsheet along with the other recommended additional documentation.

Mumbai (formerly known as Bombay), is the most populous Indian city, a megapolis of more than 18 million inhabitants, including a number of shanty towns or slums. The elevated “Ram Nagar” one, covers a 1,000 sq. metre area, located at mid-height (50 to 110 metre elevation) along the side of the “Sanjay Gandhi National Park” that covers 104 sq. km and it comprises 41,500 households. For the most part, the heads of households work, but incomes range from only €27 to €185 per month and the median income is €55 per month (in 2007 values). 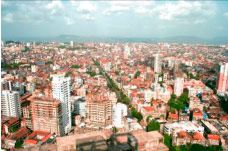 Considered as illegal and not served by the city water utility prior to 1997, the inhabitants were obliged to drill into the city water main located fairly close by, leading the city to decide in 1980 to install taps directly connected to the main. These connections were multiplied during the 1990s.

Then, under pressure from shanty town inhabitants and an influential Indian NGO, that was able to bring together shanty town community groups, municipal leaders and political leaders, the previously conflict ridden and log jammed situation improved slightly allowing the creation of the first three water networks managed by community resident’s groups.

First of all, and this was a precondition set out by the city, each group (with 250 t0 300 members each) was registered for administrative purposes as were operators likely to operate there, then work moved on to designing a least cost technical solution (a limited network comprising a collective hook-up and a system of small diameter open air pipes fed with water under pressure supplied by a powerful motor driven pump (as the shanty town is at higher elevation), put in place by the city but fully paid for by the users). A financial plan was also developed, and lastly the network installation work was done with almost all of it done for free by the relevant population.

Later on, twelve other “user groups” were added. These groups are highly variable in size, able to supply from 40 to more than 800 households. Given the technical constraints, essentially related to the electricity supply required for the pumps, the service is not a continuous one, but rather an intermittent one, and the amount of water supplied every day depends on the networks (from 30 to 60 litres per person, per day).

The total cost of the 15 projects came to €283,300 of which 60% was paid for by the inhabitants, 11% by the NGO and 10% by private companies and, at the end 19% by political parties thinking about their influence in the neighbourhoods…

Consequently this had effects on the makeup, leadership (a president, a secretary and a treasurer) and the efficiency of the neighbourhood user committees :
- True community management committees are run by competent people who are representative of the neighbourhood, who hold monthly administrator meetings and bring together all of the members for half yearly or yearly general meetings while ensuring the proper operation and monitoring of the installations as well as collecting fees (of 50 to 100 rupees per month or €1 to €2 per month),
- Committees that are administered by private companies have the advantage of a better knowledge of installation and maintenance techniques and are able to offer good service, but they do not always do so if there is no competition from other networks. User participation is virtually nonexistent, causing major issues when there is a need to extend a network or if service is mediocre or a change is sought.
- Committees wrought with internal power struggles, especially for political reasons, thankfully the exception, are ones where the inhabitant have trouble agreeing or being heard.

Experience shows that the most effective user group networks were those that are small scale ones (serving around a hundred households and maintaining trusting relationships) and that were successful in strongly involving their members in paying for the installations (hence a greater feeling of ownership and improved maintenance) and ones that set up a charging system based on true operating costs, slightly increased, so as to clear a little profit so as to envisage network improvements or extensions.

Although these community based networks are currently a temporary answer, but a fairly satisfactory one given the situation of these neighbourhoods and the relative inertia shown by the city authorities, it is nevertheless clear that for them to last and to improve, this requires at least a reinforcement of their links with municipal services, if only to reduce the blatant inequities with city centre inhabitants, by implementing a cost sharing mechanism between networks covering the price of water (that currently varies by neighbourhood), and the price of electricity too (the largest cost, made necessary by the need to power the pumps that lift the water) and also to optimise performances by setting out and monitoring certain efficiency criteria.

6) Where to obtain further information?

- Improving water supply and sanitation services for the urban poor in India. Water and Sanitation Program (WSP), 2009. Available from : https://www.wsp.org/wsp/sites/wsp.o... 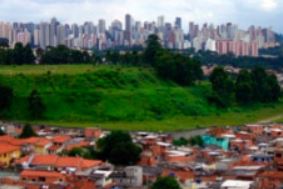 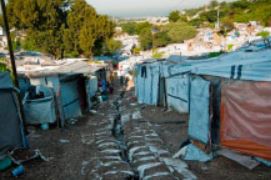 E49a – The current situation and the issues 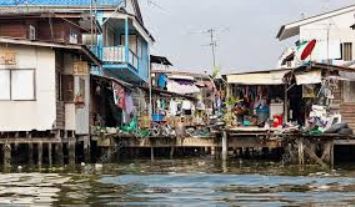 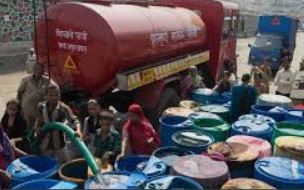 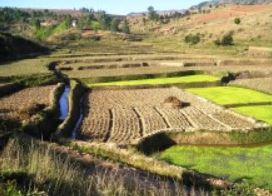 E50 – Kitchen-gardens and community market-gardens? How to create and manage them?
Soutenir par un don