Many rural or mountainous areas are isolated and have no energy sources other than wood. However, a combustible gas can be produced by mixing methane and carbon dioxide, known as biogas, by fermenting human and animal waste, pig or cattle slurry and faeces, for example, in a buried chamber known as a digester.
This biodegradation process, known as anaerobic digestion and which is due to the biological fermentation of fermentable organic matter under anaerobic conditions, i.e. without oxygen, is the same as the process which occurs in certain circumstances in swampy areas, wastewater treatment plant sludge or unsupervised landfills. This simple, natural process allows animal excreta and waste to be better treated and recycled at the same time, using the gas produced for lighting and cooking purposes.
It has the triple advantage in that, firstly, it provides free fuel, which is not readily found or is expensive such as coal, which causes pollution, or wood, which takes a long time to collect in areas that are already badly deforested, secondly, it allows the use of residues as natural fertilisers and thirdly, it improves the hygiene of households and yards.

2) What does this process involve ? How is it used ?

The process involves concentrating and treating animal excreta and waste in a chamber or anaerobic digester where, in the absence of oxygen, micro-organisms multiply and derive the energy required for their development from organic substances that they decompose into gases containing a high proportion of methane and with a very high caloric and energy potential.
The biogas chamber is buried and associated with household latrines constructed on its roof for insulation purposes (digestion by anaerobic bacteria is optimal at a constant temperature of 37°).
The system’s performance is improved by :
- the presence of latrines and their direct connection to the digester
- the construction of small animal yards or enclosures (mostly pigs) - on the roof of the chamber (improving hygiene conditions and providing additional insulation for better gas production). 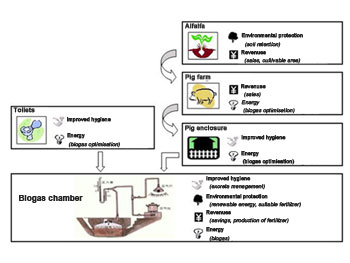 Through simple biogas combustion, users can be provided with very cheap lighting and cooking, since the investment cost is low despite the need for the use of skilled persons, during construction, in particular. It is a boon for poor or semi-desert regions, as construction can also make use of local materials and only needs a small plot of land as the chamber is constructed underground ! The underground construction does not need much land. These reactors are long lasting. However, the temperature must be greater than 15° for the reactor to be cost effective.

This process thus improves the quality of life of rural populations, and especially the living conditions of women by reducing the time they have to spend gathering wood. While eliminating respiratory diseases caused by prolonged inhalation of noxious fumes from burning wood, coal, or in certain regions, dried cow dung.
It also raises the awareness of populations to alternative sources of energy to address the serious problem of deforestation caused, among other things, by the use of wood for cooking, the uncontrolled use of which can lead to desertification of many regions worldwide.
Finally, the construction of biogas chambers meets sustainable development criteria, as the anaerobic digestion technique used involves producing clean energy from organic materials like manure, and its use is accompanied by a transfer of technology to farming communities, and the training of personnel, both for the construction of the system and for its maintenance, as well as the creation of management committees. 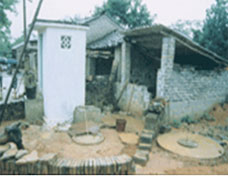 The gas produced by an 8 m3 chamber provides 4 to 5 hours of lighting and cooking gas per day
In 2005, in the GUIZHOU region in south west China, the cost of constructing and installing an 8 m3 chamber was 2560 yuan, or about €256 (excluding the free contribution of part of the labour by villagers, the cost of awareness raising and training, and the fitting out of livestock enclosures) :
- Cost of the biogas chamber : €165 (including materials : €140 and Labour : €25)
- "biogas operating system : €30 (pipes, lamp, stove, H2S pressure gauge and filter)

The substantial savings for each family are estimated to be about 650 yuan, in other words €65 per family per year.
This figure should be seen against the average annual income of the inhabitants of this region which is 1300 yuan/year, or €130/year.
Maintenance is easy, undemanding and of minimal cost.
After a year, the manure, which now contains fewer nitrates, can be removed from the digester.

NOTE. It is estimated, for example, that just 2 pigs and 5 people are sufficient to feed a 8 m3 digester.

5) Places in witch this technique seems the best suited

This technique is especially well suited to rural or mountain regions that do not have direct access to energy sources. Although it has been used and promoted by public authorities in China and Asia for many years and has appeared in Africa, it may run into obstacles that can be quite difficult to overcome in some countries or cultures where the handling and use of waste and excrement are problematic.

- Maintenance is easy, but a few points should, however, be checked periodically, such as pH and the absence of toxins.
- Water should not be added to the digester. It should also be drained but this should not normally be needed for several years.
- It is essential to make inhabitants well aware of the dangers of harmful matter and making sure that the digester is operating properly.
- Finally, it is also recommended to develop the growing of fodder crops such as alfalfa, to provide feed for the pigs or cattle. Indeed, this crop is known for its nutritional qualities and long life of more than 10 years, and is harvested by cutting down. It can also be rooted down to depths of 4 m and, when planted in strips 50 cm wide at the edge of terraces, be used to effectively consolidate such terraces and prevent soil erosion.

The Chinghu (China) water access and sanitation programme
(Directed by the NGO Initiative développement, the winner of the 2007 International Solidarity award, with the participation of the Ensemble, Sigma Informatique, Lord Michelham of Hillingly and Frères des Frères Foundations)
http://www.id-ong.org/decouvrir/pay...
The details of this programme are available on the websites indicated below (Chapter 8)
The programme is based in the Guizhou Province (Weining district), located in south west China. This landlocked, mountainous province is one of the poorest regions in China and includes three rural areas in the District inhabited by the Yi, Miao and Hui minorities.
This comprehensive project, since it also includes the construction of wells, the collection of rainwater, the development of alfalfa and pig farming, the construction of latrines, training in hygiene and community management, began in 2005.
It has notably improved public sanitation, environmental protection and access to new sources of energy through the construction of 100 private biogas chambers, which provide enough energy for the lighting and cooking needs of 100 families. The digester models used are of recent design (8 m³) and were supplied by the Agriculture Office, whose experience is based on more than 10 years of practical implementation and assessment. To optimise the hygiene and filling conditions of digesters and ensure that they are used properly, latrines (which have often been non-existent or very basic up to this point in time) have been built over chambers and livestock enclosures fitted out for a few pigs, and installed or improved (faeces recovery channels).
The NGO ID carried out the preliminary studies lasting several months, based on the choice of towns and beneficiaries, funded the materials used to build and transport toilets, paid technicians and managed the toilets project and the construction of livestock enclosures. It also coordinated the training sessions on hygiene and environmental protection. 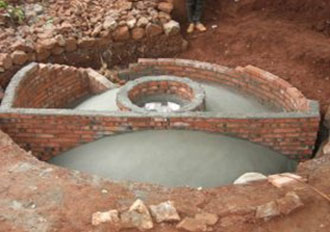 The district "agriculture office" handled the financing of the construction materials, the equipment and the operation of biogas chambers, and also organised training sessions in the use and maintenance of chambers. .
The beneficiaries, and a local technician, donated their work and financed the construction or improvement of livestock pens. Village committees handled the distribution and storage of materials on site.

8) Where to obtain further information ?

- EAWAG (Swiss research institute located near Zurich) : "Compendium of water treatment systems and technologies" : very comprehensive, illustrated and informative 158-page book, which can be downloaded as a complete document or chapter by chapter (6) and pages 73 to 74 of which are devoted to biogas reactors
Available on line at :

- PSEAU (Water solidarity programme) :
www.pseau.org  (Including Letter No. 54 of June 2007 describing the process and the project mentioned above in 2 pages)

-Initiative développement, the winner of the 2007 International Solidarity award (10-page description of the Initiative and development programme in China)
http://www.id-ong.org/decouvrir/pay...

- AKVO, a dynamic Dutch NGO, has posted on its website a very well documented and illustrated Wiki containing about fifty very concise fact sheets, in French and English, on about fifty topics related to sanitation, including biogas reactors. Downloadable from : http://akvopedia.org/wiki/Anaerobic...

- Biogas development project for environmental protection and improvement of the living conditions of populations, particularly in Africa, by Eric Florantin TANKEU
http://projetbiogaz.skyrock.com/

-YouTube : 8’ video, in English but well illustrated, entitled "Bio-gas : Renewable Energy in the Himalayas".
Produced by the Indian NGO "Grassroots India", this video provides a reminder of the ancient drudgery of collecting wood in the Himalayas and then explains the benefit, the principle and the method of construction of a biogas reactor.
Downloadable by clicking on : http://akvopedia.org/wiki/R%C3%A9ac...

-YouTube : another interesting 5’ video, also in English, entitled "Organic farming - Cow dung to biogas".
An Indian farmer explains how he produces biogas from the dung of his cows.
Downloadable from : http://www.youtube.com/watch?v=KM9S...

- YouTube : Very short video lasting only a minute showing, through animated diagrams, how biogas is produced
Downloadable from : http://www.youtube.com/watch?v=but5...

- YouTube : video-slide show, in English, entitled "Pigs and biogas in the Philippines" in which a Filipino farmer, after a 3’ presentation in English, that can be skipped if you don’t understand English well, shows, as a slide show, how he intends to generate biogas from his pig farm.
Downloadable from : http://www.youtube.com/watch?v=mX0F...